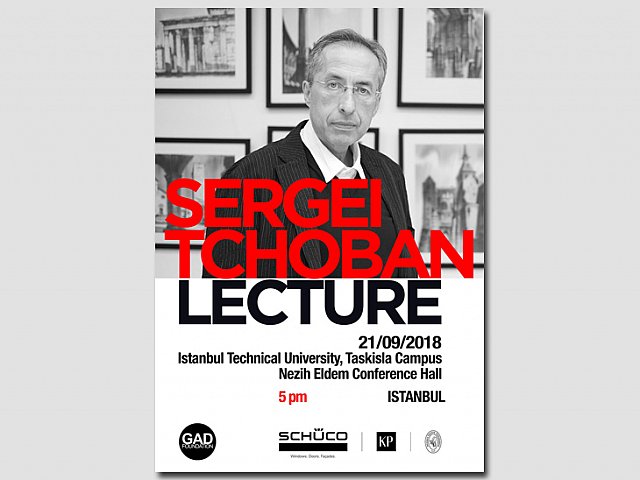 The GAD Foundation is organising a lecture by the Russian-German architect Sergei Tchoban for September 21st, 2018 at Istanbul Technical University, Taskisla campus in Istanbul at 17:00 in the Nezih Eldem Salon. Sergei Tchoban is a well known contemporary architect working in Europe and Russia with a focus on modernism, architectural symbolism and drawing. Born in Saint Petersburg, Russia, in 1962 he is currently partner in the the Berlin based practice Tchoban Voss Architekten and with Sergey Kuznetsov partner in SPEECH in Moscow. In 2009 he founded the Tchoban Foundation which later became the Museum for Architectural Drawing in Berlin. In 2010 and 2012 he was curator of the Russian National Pavilion at La Biennale di Venezia architecture biennial in Venice. Also he was the architecture of the Russian Pavilion for the EXPO Milan in 2015. Tchoban’s built work encompasses many buildings in Europe and Russia such as the Dom Aquaree city quarter and the NHOW Hotel in Berlin, The Federation Complex, Moscow and The Museum for Architectural Drawing, Berlin, accommodating the architectural drawing collection of the Tchoban Foundation in Berlin. His lecture on 21 September, 2018 in Istanbul will focus on his most recent work and his activities in drawing in contemporary architectural practice at the Museum for Architectural Drawing.